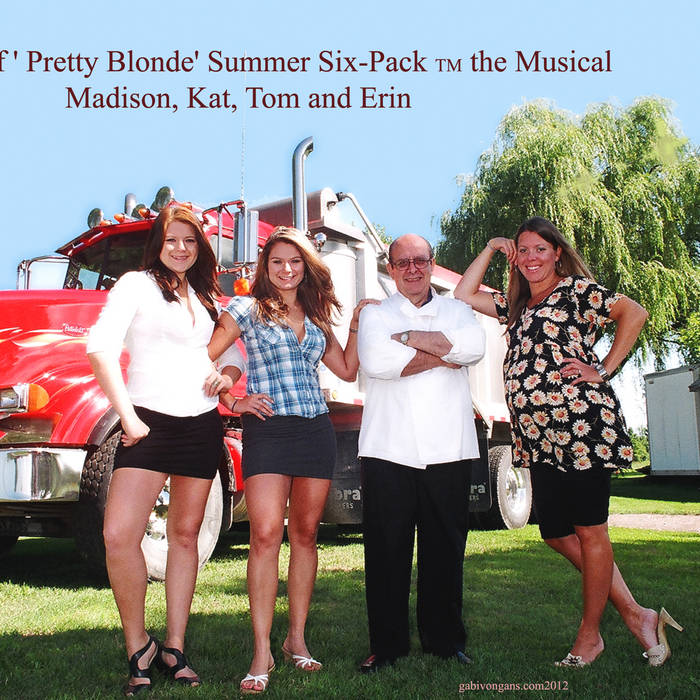 Get it on Bandcamp Now: Pretty Blonde

This story is about a career trucker who is infamous for a girl in every town , until…he meets the ‘one’ at a truck stop. The girl’s dad is the owner of the ‘ Golden Beaver Restaurant ‘ and has a few tricks of his own to get his daughters married off.

It is a whimsical journey with a special nod to a business in Ontario Canada named La Rue’s Trucking celebrating 75 years in 2021.

Characters are part of the bigger story in the musical screenplay co-written by Rob Mullen Jr and Gabi von Gans called “Summer Six-Pack” (TM) about six friends and their crazy stories through life.

The trucker / owner of the company was also the drummer in the Six-Pack Band (R) in our story. Lots of fun and shenanigans in this song.

Thank you to our photo models Madison & Kat Coutu, Tom Lycos and Erin Blackstock for playing the parts of the Golden Beaver Restaurant family !!

I am a Canadian songwriter who started with a bang in the 60's as a lead guitar man for the band the Spasstiks out of Toronto, Ontario. The Spasstiks were voted by CHUM Radio as Canada's number one band and opened the Toronto Sound Show at Maple Leaf Gardens in 1967. Bob MacAdorey a famous Toronto DJ at CHUM also had them featured at the CNE for a huge outdoor concert with a crowd topping 11,000 fans. Our hit song, Love"s Got A Hold On Me, reached number one on many charts across Canada and lead to three years of constant bookings. We toured all over North America and opened for the Animals, Ike and Tina Turner, Neil Diamond, The Guess Who, The Mandella, the Paupers and Hermans Hermits. I moved on to solo songwriting and producing in the 80's and 90's in my recording studio next to CITY TV, Swan Sound. Now with the release of my first solo project Summer Six - Pack, I am presenting my songs, my way for play and fellow artists to record. Still Rockin' after 50 years!!! View all posts by robmullenjr